Following the sudden death of his brother Ian on New-year’s Day 2010, Aiden Henry and his family decided to raise some much needed funds for the Irish Heart Foundation. Aiden, an avid BARRS member, took on the task with his usual energy and enthusiasm. “Our target was to encourage as many people as possible to run the BGE Cork City Marathon in 2010”. “When the big day arrived, we had over seventy family members and friends participating in either the Team Relay or the Full Marathon. We saw our sponsorship grow steadily as people were more than willing to donate generously in support of this very worthy cause”.

Aiden is quick to acknowledge the support he got from within the club. “Apart from the usual club activities, the legacy of this fundraiser bears testament to the efforts and contributions of individual club members, all of whom gave of their time freely and willingly”. 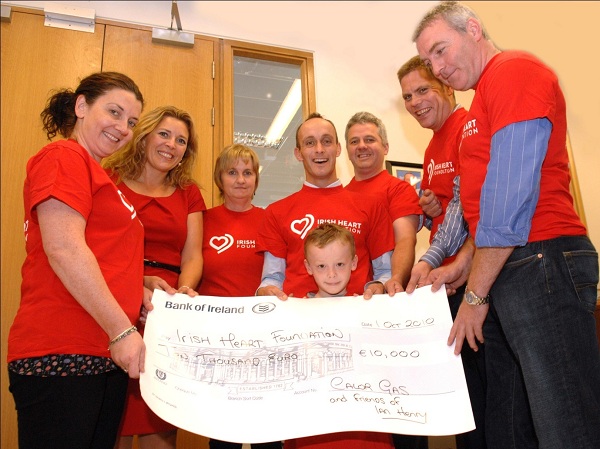 Just in case you’re wondering, that’s Aiden in the middle of the photo, behind the little guy. Aiden just completed the London and Belfast City Marathons and will be doing it all over again on June Bank Holiday Monday. “With the Cork City Marathon just around the corner, I want to say a heart-felt thanks to all those who helped us previously. In particular, a big thanks to club members Trevor O’Neil, Paul Gallagher, Willie Hayes, Colin Condon and Dáithi & Leonie Merrick, all of whom were so very kind and supportive”.

It appears that our Aiden Henry definitely has his heart in the right place, folks!