Skip to primary content
A statute (land) mile is 1,760 yards or 5,280 feet. By international agreement, a yard is 0.9144 metres, so the mile works out at 1,609.344 metres, commonly rounded to 1,610 metres or 1.61km. That’s four laps of a track plus, depending on a person’s height, 5-10 strides. In Europe and the Olympic Games, the standard middle distance race is 1,500 metres commonly referred to as a metric mile. Funnily enough, while the U.S. has yet to embrace the metric system, the standard middle distance in High School T&F competition is 1,600 metres, exactly four laps of a 400m track, which is also referred to as a metric mile. Advocates of the metric system on this side of the pond could well be accused of not practicing what they preach.

After the 2008 Cork City Marathon, somebody asked me if I’d noticed mile makers on the N22 straight road. At that stage of the race, I was involved in a life or death struggle with the pull top on a half litre Gatorade, which someone thrust on me like a half ton alligator. In any event, I’m not very perceptive after 22-23M on the road, especially, when it’s overbearingly hot! I did of course locate these markings at 22M, 23M and 24M. Often, while running on the N22, I’d try out my mile time on the 23-24M section – I avoided the 22-23M section for reasons outlined below. The point is, my times were always below expectations or embarrassing. On the track however, I’d nearly always achieve my target. I could only conclude that the 23-24M markings were out, way out! Fortunately, those markings have long since disappeared, though they might reappear for the Marathon. 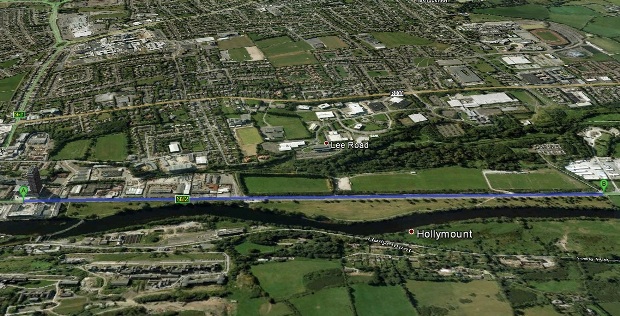 I thought it would be nice to have an N22 mile marker that would be accurate and unlikely to disappear anytime soon. Thanks to modern technology, you can now do such measurements without getting off your bum – if only Marathon training were so easy? This mile stretch runs from just city side of the County Hall, or Kinsley Hotel entrance, down to the end of the Lee Fields pathway, opposite the halting site entrance. To all intents and purposes, this is as near as be dammed to a statue Mile or 1.61km. About three quarters of the way down (at the traffic lights), the footpath has a 45 degree outward bend, but nothing to put you off your stride. More often than not, you’ll have a clear run at it, but do be mindful of the public and please don’t run on the road.

Staying on the straight and narrow

People frequently complain about the standard of public services. However, our city planners rightly deserve kudos for extending the pubic lighting and widening the footpath all the way from the N22/Orchards intersection to the Ballincollig roundabout. Prior to 2011, running this section of the N22 in winter was a task undertaken with some trepidation. It was often pitch black and the footpath was quite narrow. More than once I ended up bruised and battered having lost sight of the kerb and crashing onto the road. People said, “You could have been killed if a car was coming”. But if a car was coming, I wouldn’t lose sight of the kerb, would I!

Staying on the straight and narrow - Original N22 Footpath

It’s not all plain sailing however. There’s a cluster of bungalows about 200m beyond the Orchards intersection and negotiating these drive-ins can be hazardous. The light-coloured (bleached) concrete makes it hard to judge the dips and rises. Misjudge a dip and you’ll land on your heal with a jolt to your spine. Misjudge a rise and you’ll stub your foot and fall over shredding your hands on the jagged concrete. This section of footpath is totally unsuitable for speed work. Indeed, the issue of badly laid footpaths is more widespread; the footpaths around Victoria Cross are particularly hazardous. Concrete mixtures should have better contrast and contractors can surely do a better job with the surfaces. As for those problematic drive-ins on the N22, I might just have a spare tin of yellow paint and some paint brushes in my shed. Any volunteers guys?