St. Finnbarr’s A.C. is proud to pay tribute to the late Paddy Hennessy, former president and founding member of the club. Paddy was a modest, sociable and enterprising man of many talents, well-liked and respected by colleagues and friends.  From Somerton Park in Ballinlough, Paddy was a former employee of the Southern Health Board. As co-founder of the Ballinlough Credit Union, he contributed to the development of his local community. His colleague Jack Healy remembers him warmly as a wonderful character with a keen interest in the welfare of the Credit Union.

Nonetheless, Paddy Hennessy is indelibly linked with the sport of Athletics and moreover St. Finnbarr’s Athletic Club. On a warm Sunday afternoon in the summer of 1951, Paddy Hennessy along with John O’Connell, Dick Day and Pat Bowe set off for an athletics meet held by Rising Sun A.C. The quartet won two medals setting off a sequence of events that would culminate in the founding of St. Finnbarr’s A.C. Initially, the club was registered with 17 members and Paddy as secretary. Over the years “The Barrs” has gone from strength to strength and currently boasts a membership well in excess of 200 men and women.

At the 1950 Cork City Sports, Paddy competed as an under-18 in the 220 yards with St. Nessans (Sullivans Quay) School. In 1951 at the Drinagh Sports, Paddy was already winning at novice doubles (100 & 500 yards). Indeed, sprint doubles and trebles (100, 220 and 440 yards) became regular events for him at senior open sports between 1952 and 1955. At Ballymore in 1955 he showed his prominence sometimes leading home a One, Two and Three for “The Barrs”. Paddy was also prominent when the club first figured in Cross Country with a 3rd place in the 1953 Cork County Seniors. Among his other successes, Paddy won the 220 yards at the 1953 Cork City Sports and the 100 yards in Bandon. At the 1954 Munster Championships in Kenmare, Paddy won the 440 yards ahead of Fermoy’s Tom Kavanagh, the 1952 Irish Champion at the distance. The same year, “The Barrs” won the Cade Cup as the best club in Cork. 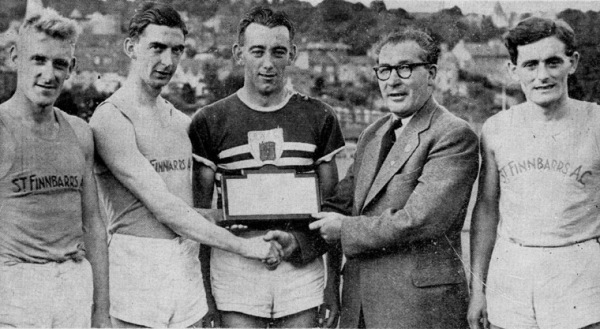 In 1955 Paddy was named “Cork Athlete of the Year” winning twelve 1st and seven 2nd placed prizes and helping “The Barrs” to retain the Cade Cup. He was also the first winner of the Cork County Decathlon Championship, coming ahead of athletes who were prize winners in Jumps, Throws and Hurdles. And yet, despite all his success in Track & Field, Paddy remained as down-to-earth and modest as ever!

Paddy Hennessy graduated with a Commerce degree from U.C.C. in 1959 and married Kay in 1960. His wisdom and experience were always available to the club as Vice President and President. In the mid-1960s he was back in full fettle on the club committee as the doors were opened to women and juvenile members. Paddy wore his club blazer and tie regularly and with pride. One of Paddy’s initiatives, the annual Christmas morning run with gifts for the Children’s Home in Passage, became part of the club’s tradition fondly remembered by runners and the children alike.

In 2011, the club celebrated its 60th Anniversary and Paddy was presented with the “St. Finbarr’s A.C. Hall of Fame Award”. Paddy Hennessy was a devoted family man sadly missed by his wife Kathleen, children Niall, Caroline, Patricia and Brian, grandchildren as well as his extended family and friends. His name is forever linked to “The Barrs” and remembered with pride.