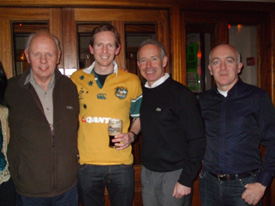 This is the running I was used to in Australia: post-school, post-college and in a town of 40 000 people, 4 hours north of Brisbane.  I had a running pal and we would often run together and when we couldn’t I would run alone or with my wife.  There were no races in the region.  No league or series, no cross-country, no road races.  (I remember running in a club like cross-country race when I was 11 and I was one of 3 competitors, one of which was a girl).  There was an athletics club for kids up to 16 and in theory for adults, but there was little to no track racing for those over 13.  Anything like that was 400km away and if you’re not quicker than 6 minute miles there you’re a nuisance.

I was running to keep fit.  I decided to enter the Gold Coast Half Marathon (500km away) as a means of setting and reaching a goal.  It was too far for my then-injured friend so I trained by myself and was glad to finish as I did.  I had an idea of what to do because I was from a strong sporting school in a capital city that did well in running.  Others would have to learn off the internet.

Something like this is typical of an Australian provincial town: there are little to no races around you, with little competition if any, and any big races on are quite a journey away, and you could well be on your own in getting ready for them.  The big races are very big, which is great craic (I was one of 6 000 at the GCHM), but there are so many obstacles in getting to them and performing in them.

Compare this with what’s on offer in Ireland.  I was running in Phoenix Park in Dublin when I caught up with some lads.  Jimmy told Alice and I to come running with them at Liffey Valley AC.  Sure enough we were welcomed into the club for the 2 months we were there.

Then we hit Cork. When I first started running in Cork I felt welcome.  I was admitted to a fantastic club (St. Finbarr’s) who gave me training, races and friends.  My first race was the Ballycotton 5 mile series dash in Ballyandreen.  I was one of 293 people of a Wednesday evening.  I then discovered ‘BHAA’ races of similar numbers.  I ran community races in Killorglin and Crookhaven, track and cross-country races were on offer with the Club too.  Prizes, showers, facilities, tea, coffee, competition and company were huge bonuses for me, not the standard fare.

The mad Finbarr’s had a marathon pack that Alice and I couldn’t resist.  We had runners around us to help us through some tough sessions which was great.  We couldn’t have got through they way we did without the club.

This is the running scene in Ireland which is absolutely fantastic.  I found myself wondering why the Cork running experience isn’t available everywhere.  After thinking it through I found the answer.

Not everywhere has raw Irish talent that gives competitive racing.  I’ve heard that the standard of competition has slipped since the 1970s in Ireland which may be so, but the sheer numbers of amateurs competing today at a sub-elite level is impressive, no question.

Recently I ran the 2009 Gridiron Classic – the big 4 mile race in Central Park, New York City and I was one of 5000.  I finished 10th in the Men’s.  My last race was the BHAA 4 mile at River Island – I ran 30 seconds quicker at Little Island and I finished 6th.  The amateur standard in Ireland is (still) good.

Every runner who comes to a Cork race will almost always have runners near them at their pace and runners ahead of them at the pace they want.  Runners here have the opportunity to reach a personal or team achievement in a social, supportive atmosphere.  Not everywhere has such a social scene in a sport.

Not everywhere has a supportive atmosphere at a race or in training.  A session with the club starts with a handshake of how you went on the weekend and finishes with a pat on the back for getting through it!  There is a continued culture of appreciation here and it can be seen clearly.

Not everywhere has John Desmond, who tirelessly works on the Cork Runners Website to make running accessible for the masses, from race information to photos to blog Q&A.  All in quick time too.  Coupled with the Club websites (especially Eagle AC), running becomes available from the armchair and the newcomer, rather than just by word of mouth.

Not everywhere has John Walshe, who can cross a county to get to a race, enter all the entrants of that race, run the race and print off the results of the same race within 2 hours!  Week to (mid)week!  His contributions to running are exceptional, from the record keeping of it to its promotion in the papers.  John, Good luck for the Ballycotton 10!

Everywhere has the numbers to run these races and to organise them, but nobody has the inclination to do it.  Not everywhere has motivated people to organise, participate or volunteer.  Cork has all three.  I write this from Dayton, Ohio at the minute: a USA town of 177 000 without a shadow of the running scene compared with your average Irish town.

All of the above, together, simply isn’t anywhere else.  Its the sense of a real running community that gives Cork all this.  So much is done for this community on a near voluntary basis, and so much of it is appreciated by the runners.  All of the above will remain while your community remains.

So the Cork experience isn’t everywhere.  Any outsider can see how good it is.  Hopefully in reading this article the average Irish countrymen or regular Cork rebel can see it too.  It is unique and it is a model for runners all over the world.  And it’s a bloody good reason for two Australians to return to Cork one day: to be part of an excellent, talented, welcoming running community.