A recent edition of The Evening Echo featured the following article by Noel Spillane on St. Finbarr’s runner Emma Murphy. 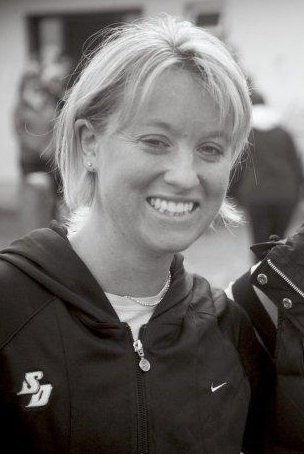 NICKNAMED the Fighting Viking on the US collegiate circuit because of her blond hair, Emma Murphy from Kenley Drive off the Model Farm Road has fond memories of her time in California.

She was on a $50,000-a-year tennis scholarship to the University of San Diego, was ranked number one on the college tennis team and won the “best player” in the state two years running.

As she says herself: “We were treated like royalty in America.”

After college she played professionally for a year, travelled around the States earning ranking points and getting into some good tournaments.

“The highlight of my pro career was winning a wild card to play in the $100,000 Acura Classic in San Diego.

“I lost in the first round to the 78th ranked player in the world, 7-5, 7-5 but it was one of the highlights for me to be rubbing shoulders with some of the tennis elite.

“Obviously playing Federation Cup for Ireland was a great experience too, we won our group much to the delight of our captain Gary Cahill.

“I coached one of the best junior players in America in Gabi DeSimone — she was ranked number 4 in the American U18s rankings.

“I travelled with her to all the junior tournaments and the Grand Slams. It was a fantastic experience and we got to mingle with the who’s who of tennis,” said Emma.

Her scholarship to the University of San Diego came about when she was just 17.

She’s 26 now, and she clinched the four-year scholarship thanks to her results on the circuit.

“San Diego was the top college in the USA for tennis at the time and when I got the call-up I was a little apprehensive about it… I wondered was I good enough for it.

“But in the space of two months I was playing at number one and I held that position for four years.

“I played on the professional circuit for 18 months or so and then I was the assistant coach to Patricia Tarabini who was a former top 10 in the world.

“She’s Argentine and she won a bronze medal at the 2004 Olympics in Athens.

“Then I started to travel with a girl named Gabbi Desimone.

“That was a great time for me and a whole different lifestyle,” explained Emma who is sponsored by Maher’s Sports and was on the Munster team that won the senior inter pros for the first time in 17 years at Dundalk recently.

“As a player everything centred around you and people are at your beck and call.

“If you want water or something they go and fetch it… but then when I became the coach… I was the one running off to get the drinks and the tide had turned.

“But the four years I had in California was a great experience,” she added.

Recalling her childhood and her avid interest in sport Emma said:

“I was given a tennis racquet by a French au pair who was minding us when I was about four but I played every sport when I was younger and some of my first recollections of childhood are trying to play hurling with my dad in the garage.

“I was always really coordinated as a child and I was fairly good at all sports.

“It was easy for me to keep the ball going and in motion at tennis and I started to play at Bishopstown tennis club, playing tournaments.

“I started winning them and then I eventually advanced to Fitzwilliam and the Irish Open.

“I won the Irish Open at U12 and then I started to play for Ireland and I travelled all over Europe when I was younger and got to the USA as well.”

Her interest in athletics and in running is long standing and goes back to her school days at Coláiste Choilm in Ballincollig and one day being asked to represent her school at the Munster Schools championships.

“I was always known to be a good athlete and even on the tennis court that shone through.

“The school asked me to run one day in the Munster championships and I won the cross-country event at 1,500 metres.

“I had never trained with an athletics club or even ran a race like that before but then I went on to the All-Irelands and, in my second race ever, I won the 1,500 national title on the track.

“No one could believe that I wasn’t a member of an athletics club but the running came real easy to me.”

“I ran the San Diego marathon last May with a friend of mine just for fun and did a time of three hours and 15 minutes and then I came back home in October and took to the athletics.

“I had played soccer for the Irish girls team and for Wilton United and I was thinking of going back to that but then I felt it wasn’t competitive enough for me.

“I did the Dublin marathon in 3.02 and then I knew my times were going down and getting better.

“I joined St Finbarr’s AC after that and after the Ballycotton 10, I really got addicted to running and I just love it now.

“Tony Shine took a big interest in my running when I was a kid but I was always too involved in tennis to take it up.

“I well remember him being there with me when I won the schools All-Ireland title at 1,500 metres.

“Then I met Donie Walsh and things moved on from there.

“I did the Ballycotton race in 64.30 and that was three months ago and then last week I did the 10-mile in the Frank Duffy race in Dublin and I did it in 60.50 so I was well pleased with that result,” said Murphy who has ambitions of running for Ireland in the future.

“I didn’t know that the Ballycotton 10 was such a big deal but I guess it is and now I’d like to run for Ireland.

“I’d like to do a few marathons… I am trying to build up my stamina and my speed, I am still 26 and the thing is you can still be running marathons at 35 or 36.

“I want to run for Ireland and maybe something bigger down the line.

“I do have big hopes for the future and I am not just running for fun any more, I am running because I love it and I want to do good things,” she vowed.

On Munster tennis bridging a 17-year gap and winning the senior inter-pros again Emma said that it was a fabulous achievement.

“I had been playing in the senior inter pros for the last seven years or so but we never got close to it because Leinster were always so strong.

“We had a good team this year with Niamh Coveney, Andrea Maughan, Joanne Williamson, Aoife O’Neill and myself and we won all our matches.”

Since coming home from the USA with a Communications degree from San Diego, Emma has been out of work and is looking to get a start as a coach in sport.

“I’d like to work in sports but it’s hard to get a job.

“I thought I’d walk into a job straight away when I came back from America but I am still on the lookout for a job.

“With the recession here I can’t get a job so I am going to go back to college and see where that takes me.

“I plan to take up a PE teaching course but it’s four years or the other option is the Hibernian course on-line for primary teaching,” said Emma who went to Coláiste Choilm and has not forgotten the help, advice and support she got from her teachers.

“I went to Coláiste Choilm in Ballincollig and they were a great help to me. The vice-principal, Cáit Breathnach was excellent with me and she was a big fan of my career and I still keep in contact with her.”