Conna village looking east with Conna Castle in the background

The County Novice, U23 & Masters Cross Country Championships of 2011 take place on Sunday 9th of October in the picturesque village of Conna in northeast Cork. Entries for this event are now closed. The BARRS will field Novice Men’s and Ladies Teams as well as teams in the M40, M50, F40 and F50 categories. As this is a Championship race, you’ll need to wear a club top. And whatever else you do, don’t forget to bring your spikes. The men’s race is up first followed by the Ladies.

Club members needing or offering transport should assemble at the UCC Farm in Curraheen no later than 10:15am on Sunday morning. Non-participating members and friends are encouraged to come along and support the club. First timers beware that this is not a BHAA race. Instead of prizes in all the usual categories, there’ll be muck in all the usual places and of course the odd hill or two in the wrong place at the wrong time. As with most Cross Country events, the venue will have been made available to the AAI by some kind landowner. Please don’t leave any rubbish or food waste lying around on-site. Cows really don’t like banana skins and plastic bottles give them indigestion. 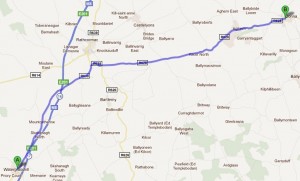 To get to Conna, you make your way to the Dunkettle roundabout via the Tunnel or the Lower Glanmire Road and head north for Dublin. Exit the motorway at Watergrasshill before you reach the Toll Plaza. Go through the village and head north for Rathcormac on the old Dublin (N8/R639) Road. About 1km before Rathcormac, you turn right onto the R628 heading east for Tallow. Conna is about 12.5km down the road or 20km from Watergrasshill. Keep an eye out for signposts to the venue.

As far as I can gather, Conna derives from the Irish cónaithe (residence, or residential). It is situated on the river Bride, a tributary of the Blackwater, in northeast Cork just inside the Cork-Waterford border and three to four miles west of Tallow. The fishing there is said to be excellent. Not surprisingly, the village contains several pubs, a shop, a post office, a Roman Catholic Church, and a Church Of Ireland Chapel. It is dominated by Conna Castle, a five-story tower house situated on a limestone outcrop near the river. 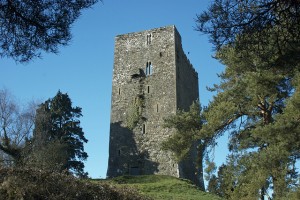 Built by the Fitzgeralds over a ten year period from 1554, Conna Castle was seized by the English and passed into the hands of Walter Raleigh, one of the main landowners in Munster including the towns of Youghal and Lismore. It was the scene of fighting with the Earl of Essex in 1599 and was captured by Lord Castlehaven in 1645. In 1650 our old friend and cross country plunderer Oliver Cromwell couldn’t resist a few passing salvos at the castle before moving on to Carrigadrohid. The castle was burned in 1653, killing three daughters of the occupant and later passed to the Duke of Devonshire’s family. The castle continued to move from owner to owner until Rev A. G. K. L’Estrange willed it into the care of the state upon his death in 1915.