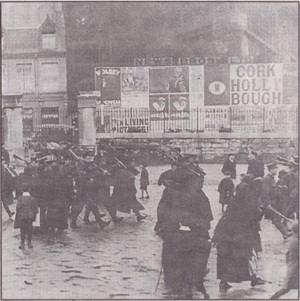 The Christmas Season has many starting points. In stores, Christmas decorations simply replace Halloween decorations. For shoppers, the season starts in mid November with the switching-on of street lights. For the faithful, Advent kicks off the season on the fourth Sunday before the big day, while in rural parts, Dec 8th is traditionally viewed as the start of Christmas. For many on Leeside however, Christmas officially starts with the publication of the Holly Bough. The Holly Bough is a Christmas periodical that brings to life the magic of Cork’s Christmas past and combines it with the contemporary festive season for Cork people at home and all over the world. This venerable old publication is a Cork tradition since 1897 when it cost just one penny and has appeared every year, except during World War II and 1948 due to a severe shortage of paper. One of the oldest surviving copies from 1924 is archived in the Cork City Library. 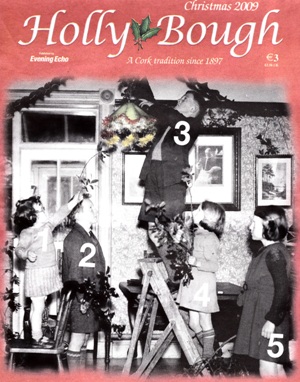 The 2009 Holly Bough featured an article on the BARRS headed “58 years running: The story of St. Finbarr’s A.C.”, perhaps the 3rd greatest story ever told: Sorry folks, I must defer to “The Nativity” and “A Christmas Carol”. It opened with an extract from a 1960 Cork Examiner article headed, “A Famed Cork Athletic Club” penned by a young rookie reporter named “Will O’Herlihy”. Will, or Bill would later achieve superstar status with RTE Sports and Après Match. I’ve been lucky to get a copy of the 1960 Examiner article from Jack Lynch, Barrs member emeritus. Many thanks to Jack for that article and many thanks to yours truly for rummaging through the archives to dig up the original 1952 group photo.

IT was a warm Sunday in the summer of 1951 and the four young men who gathered after Mass outside a Cork City church were wondering just how they would spend the afternoon to best advantage. The four, John O’Connell, Dick Day, Pat Bowe and Pat Hennessy, had a strong, active leaning to sport and when one of them learned that an athletic meeting was being held that afternoon by the Rising Sun Club he remarked: “Lets run there.” They did… and won two prizes. Thus, inauspiciously, came into being, the premier club in the South of Ireland — St. Finbarrs A.C. To-day, nine years after its foundation, the club has won every honour the N.A.C.A.I. has to offer, has a big, growing membership and some of its athletes have reached the highest pinnacle of the sport in Ireland. But perhaps the best tribute one can pay to St. Finbarrs is that the club truly embodies the Olympic motto:

“The main thing in sport is not to win but to take part. The essential thing is not to have conquered but to have fought well.”

Throughout the country the name of St. Finbarrs is synonymous with Irish athletics yet even among their legions of supporters and admirers little is known of its foundation. To many, the achievements of the club are facts, the beginnings mystery. No story of this now famous club can be complete without placing in its proper perspective the part played by St. Finbarrs Boys Club in its growth. For, in retrospect, it was here that really begun the dream that in such a short time blossomed forth into glorious reality. And each was closely associated with the other. The boys club was formed in 1941 by the members of the Legion of Mary under the direction of Very Rev. J. M. Cashman, now P.P. of Innishannon, Co. Cork, to cater for the youths of the city’s South Parish and the club competed annually against other similar clubs in football and athletics.

But such was the constitution of this club that when the boys reached the age of 18 years they ceased to be members and had to join outside sports clubs. Some of these lads later became famous — Frank O’Farrell of West Ham and Preston and Peter Desmond, of Middlesborough, the English League sides, both of whom played for Ireland in soccer, spring immediately to mind.

Such was the position that applied in the case of the four youths who ran in that Rising Sun meeting and when Fr. Cashman saw the result of their efforts he suggested that a senior athletic club be formed. But with one big difference…  for as well as catering for outside members it was in a special way for the “graduates” of the boys clubs, providing a social as well as entertainment service to the city of Cork. In this regard at the inaugural meeting of the athletic club in the old Scout Hall in Friary Lane on October 24, 1951, a constitution was drawn up that gave to the Legion of Mary the right to nominate three members of the committee. With Fr. Cashman as President, the first officers of the club were: Chairman — John O’Connell; Vice-Chairman, Dick Day; Treasurer, Pat Bowe and Secretary Pat Hennessy. Success has come readily to St. Finbarrs A.C. and the achievements in a short ten seasons read like a fairy tale.

In the past eight years it has been Cork’s champion club on no fewer than six occasions and has had its name on every trophy in the county and on many a national one. In all its members have won National championships on six occasions, Munster titles 27 times and in open, novice and youth events have won 104 county titles. In fact the total number of prizes won by the club now far exceeds 1,000.

The Cork County decathlon championship trophy has rested in the club since the inception of the event in 1955, having been won by Sean Moore (thrice), Pat Naughton (twice) — these two were also the Irish champions — and Pat Hennessy (once). The Cade Cup for the champion club in the county has been won by the club five times. This year they again finished well on top of the table but were ineligible to win the trophy as a motion passed at the Convention declared that a club not holding a sports meeting could not be awarded the cup. More is the pity that such a motion should have been passed for the original intention of the donors was that it be awarded to the county’s top club — regardless of whether they do or do not hold a meeting.

Thus the list of their achievements in track, field and cross-country events grows and it can be said with truth that they have reached the topmost heights under N.A.C.A.I. Rules. The list is indeed an imposing one and the club numbers quite a few crack athletes in its membership. Inevitably one wonders: just how would they fare in international competition and contribute fully to Irish athletics? But because of the unfortunate split in Irish athletics — surely no country can afford this, least of all one of our size — such competition is denied them. And not until this ridiculous situation has ended can we get an answer.

So much in so short a time… That in brief is the story of St. Finbarrs A.C. Until the country is united in athletics, may they continue to keep the name of Cork to the forefront of Irish athletics? After that, well, who knows what the future may bring? 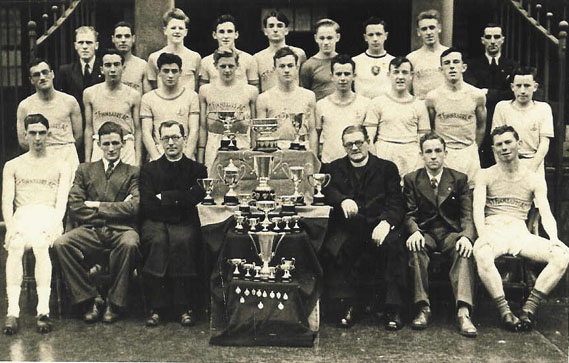